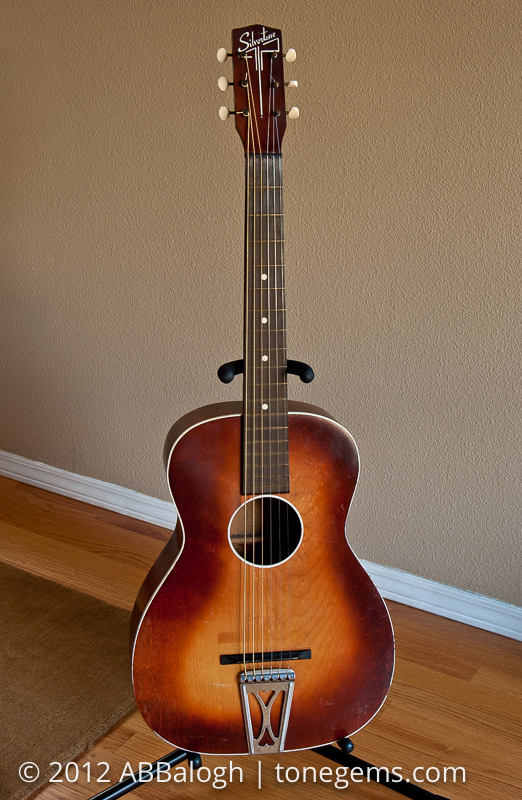 A Guitar for the Masses

From its humblest beginnings, to becoming the most produced, most purchased, and most played guitar in America during the 20th Century. From the factory in Chicago to the working plains of Texas and Oklahoma, to the Mississippi Delta, Louisiana Bayou, back to the blues clubs of Chicago, and then the garage bands of the 60s, this little birch box guitar was there.

This is the ubiquitous Silvertone 605 flattop acoustic guitar sold by Sears in catalogs and stores from about 1948 to 1970. It’s a 3/4 size all-Birch ladder braced body with a Cherry-burst finish, a solid Maple neck (no truss rod) with Ebony stained fingerboard, small brass frets, a carved hardwood nut, Waverly-type open tuners, a floating wooden bridge, a metal tail piece, and  stenciled (!) Silvertone logo on the headstock. The “binding” is simply paint. No pickguard – not even a painted on one! The scale is about 25-1/4 inch. Built like a tank!

These simple little Birch boxes take you back to early days of the Delta Blues. Think of guys like Leadbelly, Robert Johnson and Blind Willie Johnson. Although they probably never had one of these Sears models from the Catalog, they played something quite similar. And for today, think of new folk artists like Mumford and Sons.

Similar to it’s parlor cousin, the Stella H929 built by Harmony in their Chicago factory, the 605 was a simple  no frills instrument targeted to the entry level player on a tight budget. If you ordered one of these from the Sears Catalog in the 50’s, it would arrive in a cardboard box with a set of plain steel strings, a string for a strap, and a brief instruction book.

Unfortunately, these Sears guitars might have done more damage than good! Due to the crude factory setup, high action, and an inexperienced user, these guitars were quite hard to play right out of the box. So, who knows how many young aspiring guitar wannabes were discouraged and eventually quit? But, in the hands of an experience player, these little gems still have potential to create some nice bluesy tones. Especially with a slide.

This particular 605 was built in 1956. When it arrived on the doorstep (eBay!), the neglect of its previous owner was obvious. The strings were rusted, the tuners were frozen, the bridge was wrong, and the intonation was way off. A “pluck” and a “boing” was about all she had for sound. But physically overall, this instrument of almost 60 years was in great condition and the Cherry-burst finish was pretty. I slapped on some new strings and then moved the bridge to get (mostly) correct intonation. Well (sigh), the high action was still there but still quite playable. And tuned down to D, and using a slide, this guy can sound pretty darn good.

I think in the future, we’ll will try a bone nut and a real bridge with a real saddle, to see how it might improve? So check back for another posting. 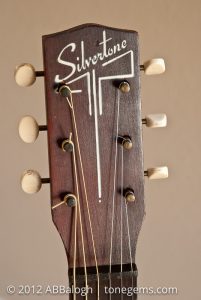 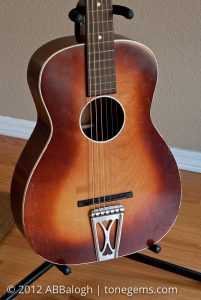 Noted for its popularity, low cost, and longevity, the Silvertone 600 Series enjoyed the longest run of any guitar series in the Sears Catalog during the 20th Century. The 605 appears in the oldest catalog that I have, which is a 1950. But according to Randy at Silvertone World the 605 began its run as early as 1948, and appeared continuously in every annual catalog until 1967 (19 years), at which point Sears just changed the model numbers from 600’s to 1200’s, and continued selling them through 1970. With a 1948 catalog price of $8.95, it was Sears lowest priced guitar, and therefore extremely popular. The Silvertone 605 was built for Sears by the Harmony Company in Chicago, Illinois. It was very similar to it’s Harmony cousin: the Stella H929.

The 605’s solid Birch top has a Cherry-red sunburst finish. The sides and back are also solid Birch, which gives this guitar it’s woodsy tone. The floating bridge is a hard-carved, sanded and stained piece of hardwood (probably also Birch). The tail piece is of punched steel with a nickel finish. The set neck is solid piece of hard Maple. The fingerboard is just the face of the same solid Maple neck and is Ebony stained to appear as Rosewood. The dots in the fingerboard are painted. The frets are brass and quite small. The darkly stained head stock has open tuning machines, three per side, with white plastic buttons. The top of the head stock is simply adorned with a stenciled Silvertone logo, which is the older 1950’s style logo.

For more information about the Silvertone 600 Series and the 605…