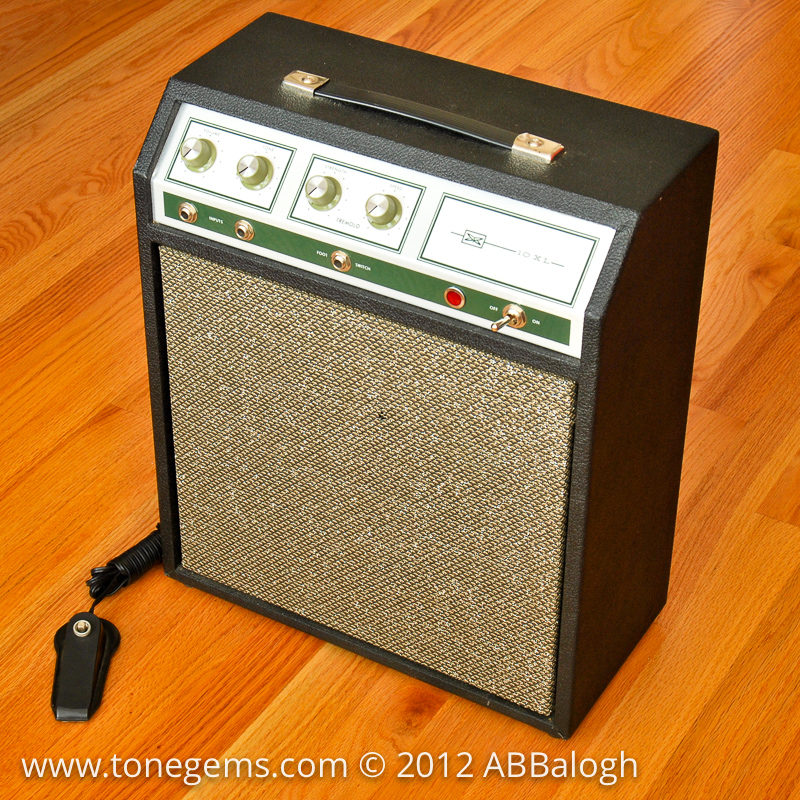 The Sears 10 XL was sold through Sears and Roebuck in the late 1960’s and early 70’s. The 10 XL is a single channel, 10-watt (peak) combo amp for electric guitar with a very cool built-in tube-powered tremolo effect.

This little amp first appeared in the 1969 Sears Catalog as a 10-watt tube-powered amp and, transformed into to a solid-state amp around 1972, and then discontinued in 1973. The label on the rear panel identified this model as Silvertone 257.1421100.

The photo of this little amp looks innocent enough. But don’t let the its appearance fool you! This is a serious sleeper of a tube amp, and sounds fantastic. Perfect for your next garage band. And you won’t usually find them as nice as this one!

Summary: A 10-watt tube combo with tremolo and 8-inch speaker. Hand-wired. Lots of midrange growl that transitions into a saturated overdrive. Great for classic and indie rock, jazz, blues, country and rockabilly. Use as a practice amp or at small venues. Perfect for recording.

Minuses ( – ): Lightweight constructed cabinet and vinyl covering (it’s a Sears amp!). The original fabric grille cloth was fragile, and therefore most are completely deteriorated by now. Not really loud enough for a big venue, but still perfect for those small and intimate gigs (i.e. coffee shop).

Surprises ( ! ): 1) The 7189 output tube! This is the higher plate voltage version of the EL84 tube found in famous British valve amps of the 60’s; and 2) The 8-inch Oxford Alnico speaker sounds great!

The Sears XL Story (as best I know it) 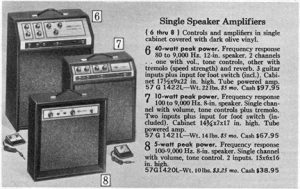 Before the XL Series, the Sears Silvertone 1400 line up of amps was designed and built by the famously efficient and economical Danelectro Company of Neptune, New Jersey. Danelectro was founded by the pioneering electronics engineer and builder Nathan Daniel. Nate Daniel specialized in building quality musical instruments and gear at reasonable prices. Danelectro built and supplied all the guitar amps to Sears and Roebuck from about 1958 to 1968. In 1966 founder Nate Daniel sold his company to MCA, and unfortunately by 1969, MCA had to shut down the operation and thus the original Danelectro Company no longer existed.

From about 1968 to 1972 the smaller amps in the Sears XL Series (the 5 XL, 10 XL, 40 XL) continued to be hand-wired tube amps. But by 1973 the entire XL line – except for the little 5 XL – had transitioned to all solid-state electronics. Exactly who built these XL amps for Sears remains a uncertain. We have speculated that the 5, 10 and 40 XL’s were still built in New Jersey with left-over parts from the defunct Daneletro.

The chassis of the 10 XL is all hand-wired point-to-point electronics with a 6X4 tube rectifier, a 12AX7 preamp tube, a 12AX7 tremolo tube circuit and a single 7189 output power tube. The amp has volume and tone controls, Tremolo speed and intensity controls, two 1/4″ guitar input jacks, and one 1/4″ tremolo foot switch input jack.

The loudspeakers that came in the Sears 10 XL varied throughout production. All speakers were 8-inches in size. But the manufacturer and type of speaker varied. This particular model has an 8-inch speaker made by Oxford with an Alnico magnet, which perfectly compliments the lower output level of the 7189 power tube, and sounds great in this amp. Some other 1421 models were made with speakers from the CTS or Fisher factories, and by my account, those all had ceramic magnets instead of Alnico.

The Baffle Board and Grille Cloth

The baffle board is typical Silvertone quality: 1/8″ pressed board (Masonite). That just helps to establish this amp’s personality. The original silver, gold and green sparkle fabric that covers the baffle board is quite delicate, and in most cases rotted away over the years. Thankfully, somehow the original fabric survived on this model.

This 10 XL is in fantastic condition for it’s age. It even came with the factory original vinyl dust cover and tremolo foot switch. It is all original, except that I replaced a broken power switch, and then replaced the old 2-prong power cord with a safer grounded cord. The tubes, chassis, speaker, cabinet and finish are all in perfect condition — sans for the cigarette-sized hole in the original grille cloth (not by me, it came that way!).

the other maker of sears guitar amps was electrnic sound corp of chicargo ill during the 1970s to about the late 80s. they used oxford, and quam speakers and maybe cts or some utahs. the also made cabents for the game manufactuers wiaims/bally/ etc.

That’s great info! Thank you. I will look into that further… ~alex

The Silvertone 1420 (Sears 5XL) is identical to the older Danelectro built model 1459. After Danelectro was no more, do you think maybe they built the 1420 for Sears from old Danelectro parts, or maybe just copied the Dano design? ~alex