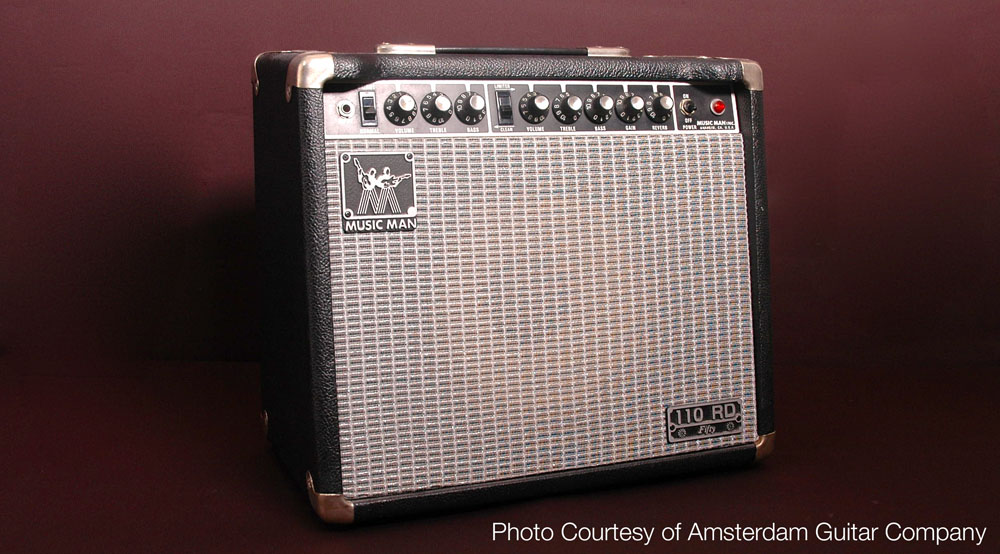 This page (which is a work in progress) is dedicated to the Music Man 110 RD Fifty guitar amplifier, which I recently had an opportunity to play.

Last weekend I was fortunate to make some new friends, hang out, and play some guitar. I had never met these guys before, but we hit it off right away, and it was a great time had by all. Thank-yous go out to our hosts David B, and his wife Elizabeth, who graciously allowed us to invade their home and make noise until the early hours of the next day. And thanks to the other guys for letting me be part of the group. I had no idea I would be in such good company!

During our Saturday night “jam session” (and I use the term loosely), I had the opportunity to play my ’70 Silvertone Mosrite Copy through David’s vintage Music Man amp. And boy, what a great amp that was! It was a Music Man 110 RD Fifty. Similar to the one pictured above, minus the grill fabric, it was the perfect match for my old solid body Surf Guitar with Teisco single coil pups. I simply plugged my guitar into this amp and it immediately started playing beautiful big clean tones with just enough added bite and grit. I loved the sound of that amp so much that I decided to dedicate this page to Music Man, and specifically to the 110 RD Fifty.

BTW: If you don’t know what a Mosrite is, then Google it right now!

Back in the mid 70’s a new music company from Anaheim California, called Music Man, hit the scene. This new company was founded by some former Fender employees: Forrest White, Tom Walker, and most notably Leo Fender. Leo himself designed a new line of amplifiers and a new bass guitar for the company. (BTW: The bass guitar, called The Music Man Stingray, is still around today and sold by the Ernie Ball Company.) Some of you reading this will know more than I about Leo Fender, his second guitar and amp company, his Stingray bass, and the Ernie Ball connection, as I am still learning the facts.

The Music Man amps were designed to be clean and LOUD with lots of headroom! They sounded very “Fenderish” (I wonder why?). According to literature, Music Man amplifiers were a unique hybrid design, employing solid-state electronics for the preamp stage, and tubes for the output. Apparently, the 12AX7 tube in the preamp stage is just for the distortion only, but I’m not exactly sure about that? The amps were big on power and built like tanks, to handle the difficult task of traveling professional musicians. Music Man produced amps in several sizes (65-watt, 135-watt, 150-watt) and configurations (combos, heads, cabs). 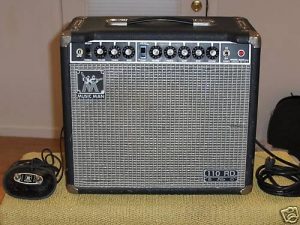 The Fifty series was introduced in the early 1980’s. The Fifty series included heads and cabs, as well as small combos that had either 10-inch or 12-inch speakers. These amps were packaged different ways. Some had a built-in distortion effect; others had a phaser; but all had real spring reverbs. 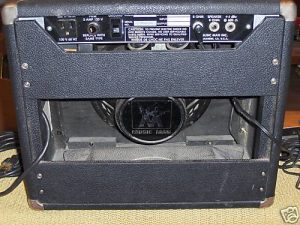 The 110 Combo with Reverb and Distortion (RD)

The 110 RD is a compact (but heavy!) 50-watt single-channel combo, with a 10-inch Ceramic speaker, reverb and distortion effects. I read that the designers of the amp were aiming for a clean tone similar to a Fender Blackface Deluxe Reverb, and apparently they hit the target!

Now the one I played had a woven wire mesh front grill, so it looked more like this one. But that just added to its character.

As I work to gather more info about the company and their products, here are some links:

More later (to be continued…) 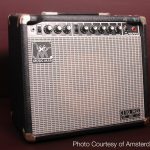 Hi, Alex
I have a Peavey Musicman model No. 112-RD-50, similar to or exactly the same as the one featured in your article. I remember purchasing mine from American Music, located in Seattle, WA, sometime during the mid to late 70s. So although it’s the spitting image of the one in the article, I did purchase it some years before 1980.

I’m considering selling it and was wondering if you had any idea what it might go for on today’s market?

Bob,
Thanks for reading our article. You say “Peavey Musicman” but I believe you are referring to just the original Music Man, not Peavey? I have seen the Music Man 112-RD-50’s selling on eBay from about $550 to $700, depending on condition.
~Alex

Hey Alex, yup yup yup about your exp with the Music Man 110 RD-50! I know what u spk of, I own two in excellent orig cond & they’re stayin’ with me lol! These 110’s are superb & fly way under the radar of guitar plyrs but I don’t understand why. In big cities like NYC where musicians subway to gigs these little giants are revered. I’m going to try a Celestion G10 vintage in one of them, just for fun.
Keep playin’, Eddie, Toronto, Canada.

Eddie, thanks for checkin in, and telling us about your Music Man. Let us know how the Celestion G10 sounds!

Well, I finally got around to installing the Celestion G10 Vintage speaker (8ohm, 60w) in one of my MM 110 RD 50 amps (have two), only took +1 year lol. Fantastic improvement on ALL sonic levels! Highly recommend this upgrade, do this. Don’t know what took me so long, just stuff i guess.
Super ez too, the speaker & grill removed forward as 1 unit and Celestion screw-holes lined up perfectly. I’ll hang on to stock spkr to keep amp’s originality.
Curious, anybody tried out other spkrs??
Rock on MM brothers! (are we able to upload photos here?)

Eddie,
Thanks for the update! Sounds like the Celestion G10 was a great choice! And makes sense too, since a lot of the guitar speakers we have available today sound soooo much better than speakers they had in the 70s and 80s. Actually, I believe mfrs back in the 70s and 80s were just making bad choices on the speakers for their amps.

You could try emailing me your photos, I would love to post them here on the site.

I’m not sure when they started making the 50 watt version but mine is a 1981. I have owned at least 75 amps. This one is a definite keeper.

Hi JIm!
Thanks for that info. Glad to hear that you still have yours! I have revised this page, by changing the dates to 1981-1983, which probably fits the Music Man timeline better.

the date built is on a white sticker under the top back panel on the right
year/month like 83/3
i fell so deep in love with the amp i put an ad in VG mag and acquired 10
some heads/10’s/and 112’s
the last editions show a more wedge shaped cabinet ..wider at the bottom ,
harder to tip over …. first ones….no wedge shape at all
revision e models have a mid shift rocker instead of the clean/distortion rocker in the
center of the panel i have a 112 and a head both with this set up and they both have black grills the head was originally a half stack with a closed back 1 15 bottom
i also had a white rev e half stack
it also came with a closed back 1 15 bottom
in both cases i sold the bottoms and used all sorts of other cabs with these heads

sovtex 12ax7 lps is a secret weapon for the amp enhancing smooth creamy sustain
the 2 110 models i acquired were equipped with JBL and EV speakers
a cool pair of amps for sure
the EV magnet was cut along the top to fit under the chassis no way a home made fit .. it must have been built for the amp at ev

GOD bless leo and the rd 50

Bruce,
Thank you for all that valuable information! Great to hear from people who were there, playing their gear! (I was in college, broke, and still hadn’t begun playing seriously) Your contribution will make this page on the 110 even better! Since I wrote this article, I have passed on several, but still intend to get one in 2016!