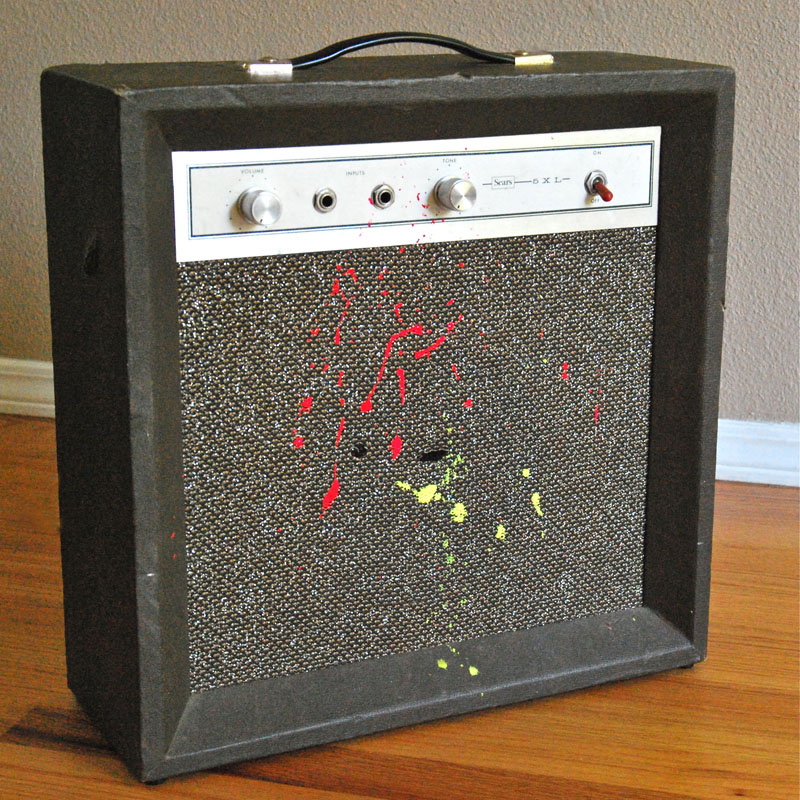 Welcome to our first review. Please consider Tone Gems a resource for vintage guitars, amps and gear of non-repute. We will strive to make each review rich with information and content, including inside gut shots, electrical schematics, audio, video, manufacturer specs and more. Since this is our very first review, please excuse any rough spots. We welcome your comments and feedback. Thanks ~alex.

Summary:  Five watts of hand-wired boutique tube heaven for a fraction of the cost. Lots of midrange growl and creamy overdrive. Great for  jazz, blues, classic and indie rock. Use as a practice amp or at small venues. Perfect for recording.

At first glance the Sears 5XL guitar amp would be easy to disrespect, even considering it’s legacy in the line of original Danelectro/Silvertone guitars and amplifiers. And why not, it’s a Sears, right? Well, that’s where you’d be wrong. We recently discovered this 5XL at Trade Up Music, a local music shop in Portland (see posting: How It All Began…). It was dirty, dusty inside, and a little beat-up. It appeared to be all original, except for two replaced vacuum tubes, and was fully functional. Later, we discovered that someone must have upgraded the capacitors with new Orange drops (more on that later).

My son Jon, who likes to play alternative and indie stuff, thought this amp would be a perfect match for his 1950′s Gretsch Electromatic or his newer custom modified Telecaster. I was not initially impressed. But boy was I wrong, and he was right!

The 5XL is an all-tube amplifier producing a modest 5-watts of peak power through a single 8-inch speaker. It has one channel, two instrument inputs, and separate volume and tone controls. The cabinet is built from cheap pressed board and the speaker baffle is 1/8-inch thick Masonite. It is clad in an equally cheap, thin green vinyl that stretches and tears easily.

At lower volume this amp has a clear, clean sound and decent frequency response. But with only three tubes pushing 5-watts it’s more fun to dial this puppy to 10! At that level it’s easy for the player to control the output and vary the tone from clean to full distortion.

This amp is also friendly to effects pedals. It sounds really good with a decent analog delay or analog reverb pedal.

Video of the 5XL

How good does it sound? See and hear for yourself. Here is Jon playing his modified Squier thinline Tele through the 5XL. Hope you have a good set of speakers connected to your computer.

Who built the 5XL?

The tube version of the 5XL was sold by Sears in the United States from about 1969 through about 1972. It was Sears entry level into their line of guitar amps. But the original manufacturer of the Sears 5XL is hard to nail down. I have seen several different builds of the Sears 5XL amp on eBay and elsewhere on the web. Up until 1968 or so, the Silvertone line of electric guitar amps were built for Sears by the Danelectro company of Neptune, New Jersey. In fact, the 5XL is identical in electronics and appearance to the earlier Silvertone 1420 and 1459 amps that were built by Danelectro. But Danelectro was purchased by MCA in 1967 and was, unfortunately, out of business by 1969. This particular sample appears to have been built in December of 1968, so it’s possible that it could be a Danelectro original. But I suspect that even later models were built for Sears by others, maybe using leftover Danelectro parts?

UPDATE: I recently noticed that the schematic diagram for the Harmony H303A is nearly identical to the Silvertone 1420 and Sears 5XL. So it might be possible that these were built for Sears by Harmony. However, I thought Harmony was struggling to stay open around this time as well?

UPDATE 2: This basic amplifier design was used throughout the radio and musical instrument industries for decades. Which makes it even harder to pin point the factory of origin. The amplifier is a hand-wired, point-to-point, single-ended Class A amp. The chassis layout and construction is standard to Danelectro/Silvertone design dating back to 1950’s. It is very similar to the Silvertone 1430 chassis, except that it has a separate tone control and a voltage isolation transformer which the 1430 lacks. Apart from some replaced tubes, this chassis has all its original parts including the big paper-oil-wax filter capacitor. Amazingly, this amp is still quiet while running. The three vacuum tubes (thermionic valves) used here are: one 12AU6 for pre-amp, 5OC5 output, and a 35W4 tube rectifier. Curiously, we believe someone replaced all the original capacitors with newer polypropylene film capacitors (Orange Drops!) which may have something to with the usually smooth tone of this sample.

A close up view of chassis showing the Orange Drop caps and volume pot. The stamped 7-digit code on the pot indicates it was manufactured by CTS (code 137) on the 48th month of 1968. Sears used a lot of cheap parts. No exception here. But for some reason this original 8-inch speaker made by Fisher with an Alnico magnet sounds great! Even though this little amp is as basic as it gets, it simply excels at what it does. And that qualifies the 5XL as a Tone Gem. Perfect for recording jazz, blues or rock. And perfect for the player looking for that alternative indie sound. But fare warning: manufacturing quality of this amp was inconsistent and not all samples found today will be built like or sound like this one.

Schematic for the 5XL

I’m working on a new schematic diagram for this amp which I will add here later. In the meantime the schematic of the Silvertone 1430 (shown below) is somewhat similar to the 5XL, except that the 5XL adds a tone control and has no safety fuse! Diagram courtesy www.freeinfosociety.com. See also schematic for the Alamo Capri which is very similar. You might want to add that as an update. ( I can e-mail you one if you like).
I bought a “5 XL” on e-bay that needs to be repaired/restored. It does NOT say Sears on it anywhere (however, the back is missing…) but has a big Danelectro logo on the grille. It does say “5 XL” on the front panel but where you sometimes see a Sears logo on the front panel there is a logo that looks like an atom or something (???). Anyway, I was wondering if you ever found another schematic. Most of the wires in this one have been cut – I have no idea why as it appears that all the original components are still in place despite all the wires being cut (??!). Anyway, this one has TWO chassis mounted transformers (wires cut) which appear original which I do not see in your pics. It has the output transformer on the speaker like in your pics. Three trannys total. (??…)
Any help would be greatly appreciated!!
Love your site. Keep up the good work!
Thanks.

Ty,
Thanks for stopping by and leaving your comments. What you are describing sounds odd to me. To the best of my knowledge, Danelectro did not market a 5 XL amp with a Danelectro badge on it (that would be news to me). The logo that looks like an atom is actually a Sears-Roebuck (SR) logo from that era. I have two amps with that logo. It sounds like you have a mixture of things going on there (a frankenamp?). Could it be possible that someone before you took it apart and added the Danelectro logo? The transformers you describe definitely sound to me like someone’s custom modification. Could you email to me some photos? That would be great. ~alex

Also, thanks for the tip about the Alamo Capri. The schematic does look similar, and it uses the same tubes. I will research that further. Thanks!. ~alex

I have been slowly hot rodding one of these little amps for a while now. I have recapped/potted, traded out the OT with a Hammond, and replaced the cheapy 8″ speaker with a Jensen p10r. I’ll tell you what, for blues harmonica it is a tone monster. To play with a band I just stick a microphone in front of my speaker and let the PA do all the heavy lifting. I have a few big tube heads and combos, but I still plug into the hot rod 5xl every time.

That sounds awesome! Thanks Scott for sharing that info about your 5xl.