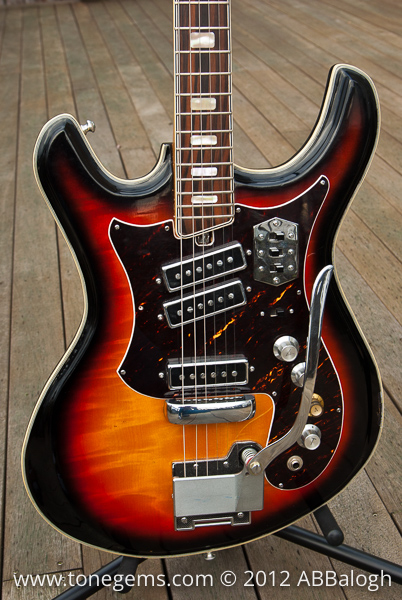 Here is the latest addition to the Tone Gem galaxy of stars: a vintage 1970 Silvertone 1445. Also known as the Silvertone Mosrite Copy, made in Japan by Teisco. Picked this one up in Seattle from John, another Silvertone collector. The 1445 represents the pinnacle of Teisco’s contribution to the Sears Silvertone line. All high quality materials and workmanship.

This crazy looking solid-body electric guitar is ready to play surf, jazz, classic rock or country, and is simply a kick to play! The exquisite Silvertone 1445 (I mean, by dept. store standards of course) was hand-crafted by Teisco in Japan for Sears. The body style is an excellent Teisco version of the 1960′s Mosrite of California guitar played by rock Hall-of-Famers, The Ventures (Walk, Don’t Run and Hawaii Five-O). 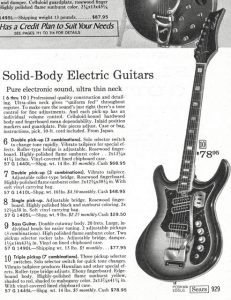 The Silvertone 1445 first appeared in the Sears catalog in 1968, and hung around in a few variations through the early 1970′s. It has three very loud single-coil (“Hound Dog”) pickups wired in series just like the old Danelecto models. The fast, low-profile solid Maple neck with Rosewood fingerboard sports medium to low action and is easy to play. The growling Teisco “Hound Dog” single-coils have lots of bite, and the solid poplar body has plenty of sustain. Of course, the single-coils and non-shielded wiring can be a bit noisy if you’re not careful, but easy to avoid. And I must say that the hand-painted sunburst finish over the flamed Maple; the contoured German carve body with tortoise shell pickguard; and intricate triple-layer celluloid binding makes this guitar a stunning sight to see. 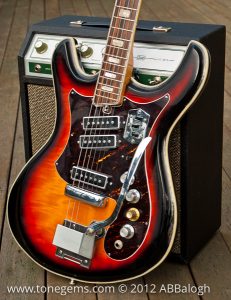 Hey just wondering what these models are worth. I picked one up from a guy in Alberta, Canada. I paid $125 for it. The electrics are alot crackily but they still work. Everything else is in good shape with the usual nicks and bumps. It also came with an old hard case. Looks a little big for the guitar but it looks old. It has a very thin red plush interiour. Not sure if I will get a reply if you reply through this web site so if you could reply directly to my email address [address removed].

Thanks Terry for visiting the site. I have responded to your question by email, as you requested.

Hi my name is frank i have had mine for about 20 years i haven,t picked it up in years whats 1 of these worth model #319.14459 japan silvertone mosrite copy/tone gems

Hi Frank. Thanks for visiting the website! I have been following the prices for this guitar on eBay and craigslist for about 2 years. The asking prices have been all over the place. Its value really depends on the condition and the amount of original hardware. A lot of these guitars have lost their whammy bar and chrome bridge cover. A decent price for one like mine would be around $450, or even more.

Hello sir, I have one of these but it has the holographic atomic symbol headstock. Do you know the difference? Here’s what the headstock looks like: http://www.mandolincafe.com/forum/attachment.php?attachmentid=52948

@cornbread
Yes. Even though the headstock and logo changed over a short time span, these guitars are all the same model. Sears started using the atomic SR logo in ’71. Therefore, your guitar would have to be a 1971 model, or later.

I have this Silvertone-teisco 1445L guitar.

What is a fair price for this type of guitar is good condition?

Hi Ian. Thanks for the inquiry. I have answered your question via your hotmail address. ~alex.

I’m about to purchase one of these 1445 Silvertone’s, it is a 1969 and in perfect condition other than the tremelo bar is missing. Do you know if these are easy to get hold of?

Try eBay. This one looks exactly like the one on my 1445L:
http://www.ebay.com/itm/EZPZ-VINTAGE-TREMOLO-VIBRATO-TAILPIECE-WITH-BAR-BEST-PRICE-TEISCO-TULIP-/261093735966?pt=Guitar&hash=item3cca663e1e

Peter, congrats! Send us some photos of your new guitar after you get it.

I’ve had my Silvertone 1445 since1974 and it still plays. It was my first electric guitar. Bought it from a friend of mine with a Sears tube amp but the amp got stolen. Saw one on Ebay for almost $500. Bought both amp and guitar for $40. Missing my bridge cover. Never got a case with it and the only thing it fits in is a coffin bass case.

Want even better Mosrite-like sound from the 1445? Bypass the other two pickups and wire the bridge pickup straight to the input jack. Even better, replace the bridge pickup with an M3 or California “RH-100″ Wow! No need to drop $6,000 to get that Mosrite Mark 1 sound.

Awesome mod! Love getting comments like this. Thank you Paul!

I just bought one of these on eBay for $250. The differences are that the headstock is almost like a generic block but the top of the head is shaped like a wave. Another difference is there is no white lining surrounding the edge of the body. The pearl inlays stop at the 17th fret, there are actually two separate smaller inlays on the 12th fret, and the paint job and finish covers the entire guitar including the back of the neck and back of the headstock. My questions are what year was this model made? Also, it’s missing a volume knob, the whammy bar, and the original bridge so I’m also wondering where I could find these parts?

Thank you very much

The guitar was built in Japan at the old Teisco factory, which was owned by Kawai by that time. You can search for parts on eBay by searching for “Teisco knob” or “Teisco whammy bar.” The is a seller on eBay to offers new reproductions of the original Tesico parts. That seller go by the name ezpz-parts. I have not purchased from that seller so I cannot endorse. But the parts look pretty good.

Thanks! I’ve already found a teisco old style tremolo and spring. The seller you mentioned has some good stuff. I even picked up a new strap. The one I bought is indeed a 3 pickup. I’ve seen more than a few of these recently and a lot of them seem to have small variations. I’m not sure if they were moded that way or actually made that way. First time I saw this guitar I instantly fell in love. Then that love went to a whole new level when I heard what it’s capable of. Vintage just has a feeling that not even repro can give you. I have a lot of years left and this will for sure be my #1 guitar out of any others I get in the future.

Glad that you love the guitar and are finding the parts you need. Enjoy!

I bought one of these guitars back in october and I love its uniqueness.
However my is slightly different.
Mine has a big almost flag shaped headstock with 3 tuners on each side, and doesn’t have binding all the way around the body. Does this make it an older/new model?
Also what are all the woods that make it up? I don’t think mine has the maple top. so what’s the body and neck?

Jayson, thanks for the comments. From your description, it might be the last version, about 1972, I believe.
~alex

Hey there, I own a Silvertone 1445 (actual SN is 16877) but the wammy bar and tail bridge are destroyed and missing. Where can I get a replacement? Is it possible or do I need to add a new one on?

thanks for any and all help.

James, thanks for posting your comment! The parts you need can probably best be found on eBay. Check out the seller named ezpz-parts.

But don’t know about the tail piece and bridge. You might have to buy another Silvertone 1445 to get the parts off it.

I own one of these great guitars. Silvertone from Sears. 1445 model I believe
It is in mint condition and sounds great with the original pickups.
I am missing one volume knob and would really like to get one to make this guitar
good as new. Any idea where I could get an original knob?

Hi Randy!
These knobs for this guitar are rare and hard to find. Occasionally one will appear on eBay. That’s your best bet.