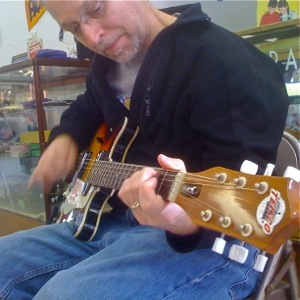 A guitar time capsule discovery. While out trolling the flea marts, pawn and antique shops today, Jon and I ran into this absolutely beautiful 1967 Tesico EP-7. It came with its original matching Checkmate 12 amp, guitar strap and cables. It was entire ’67 Teisco electric guitar starter package, minus the original gig bag (but the seller might have had that hanging around, too). Even though the set was 45 years old, the guitar and amp were as new as the day they came out of the Teisco factory. Someone must have received the set back in ’67 and then locked it on a closet. The nitrocellulose finish was perfectly glossy, the chrome was gleaming, and the rosewood fingerboard and brass frets appeared to never have been played before today. We did hear some hum coming from the solid-state Checkmate 12, but that may have been caused by the super-cheap unshielded guitar cable we were using. The EP-7 sounded just “OK” through it’s little solid-state amp. But when we plugged it into a ’47 Harmony tube amp, those two single coil pickups really began to shine. We were impressed by this little guy. It was the find of the day, and maybe the year.